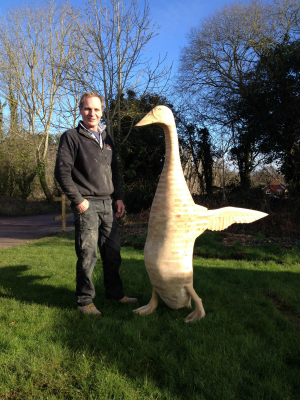 My fingers traced the smooth, cool contours of a giant manta ray, the intricate detail of a delicate seahorse, the dorsal fin of a sleek shark, and the talons of an eagle about to take flight. They are just a few of an exquisite collection of sculptures created by Andy Baerselman from Lymington in South England.

There’s a long story behind our relationship with Andy… here’s the short version.

We met Andy Baerselman 40 years ago in the UK when he was a young carpenter. His parents and my husband’s parents happened to strike up a conversation at a café in Wales and finding they had things in common – travel, grape-growing, and fishing – business cards were exchanged along with the usual pleasantries about keeping in touch.

Several months later Mike and Wendy Baerselman from the UK contacted Annette and Ivan Tyerman from New Zealand asking if they would like to host them, and vice versa. This was the beginning of an enduring multi-generational friendship, informal home swapping and hosting arrangement that is now in its 40th year and third generation.

When we were last in England, we caught up with Andy on the ocean-going launch he has been restoring in Lymington. As a sideline to his carpentry business and to express his creativity, we had also branched out into sculpture.

He showed us some of the magnificent rays, sharks, eagles, turtles, wolves, ducks, and seahorses he had shaped from poplar plywood imported from Italy. The striking, large-scale sculptures are exhibited in the UK including at the High Performance Art Gallery near the first class lounge in Terminal 5 at London’s Heathrow Airport and the Coastal Gallery in Lymington, Hampshire. Andy also sells them privately through his own website. 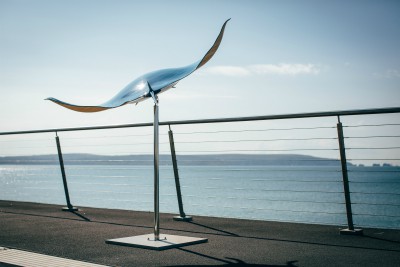 A giant manta ray, one of Andy’s most popular works of art

The carpenter-turned-sculptor is doing phenomenally well. His work is sold internationally to private clients, art dealers, restaurants, super yacht owners, and even an investment company in Beijing.

The manta ray is Andy’s most popular design. He’s sculpted four rays: the first in 2015, with a wing-span of almost three metres, sold to Rapier Design Ltd’s pharmaceutical division for an undisclosed sum. The piece travels all around Europe as a display at the seminars the company runs. Other manta rays have sold to clients in the Middle East and Lymington, and a manta ray with a two-metre wing-span is currently for sale at Heathrow’s T5 Gallery for £14,000.

I was fascinated by the technique involved in creating the art works. After deciding on the subject, Andy says the initial part of the process of making the wooden sculptures is to roughly cut the shape out of the poplar plywood and bond the pieces together with resin.

“The most important thing is to make sure I have bonded enough wood together to create the movement I am trying to achieve,” he says. “To carve the piece, first of all I use a chain saw to rough cut the initial shape, then various carving and sanding tools to create a finer finish. To complete the pieces, I spray them with coloured resin and finally a clear resin to give the pieces a durable and water/ weatherproof finish.”

From start to finish 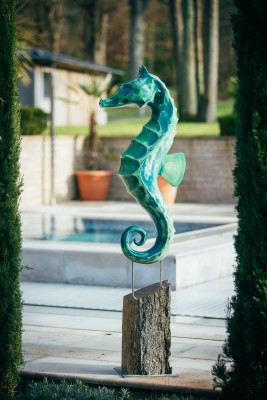 On sale at the Coastal Gallery, Lymington

Andy says he goes through three stages in creating the sculptures.

“Every piece seems to have a start, middle and finish,” he says. “I start slightly apprehensively, hoping that the piece will end up as the image in my head. The middle stage is fairly functional, but I’m trying to improve movement observations on each piece.”

“And the finish is a recognition of when it’s time to stop. There always seems to be another tweak I’d like to make,” he says. “Hopefully the end result is a contemporary and very tactile representation of a beautiful species.”

Meantime, back in New Zealand, we’re hosting the third generation of the Baerselman family. Andy’s son Mick, also a carpenter, has been staying with us in Gisborne. Mick has met our daughters, Sophie and Bridget, and we hope the relationship continues to a fourth or even fifth generation.

It’s a wonderful way to enrich a travel experience to a foreign country… like having an extended family on the other side of the world.

Contributing Editor Justine Tyerman is an award-winning travel writer, journalist and sub-editor from Gisborne, New Zealand, with 20 years’ experience in newspaper and freelance work. Check out her work at www.just-write.co.nz and Tyerman’s Travels Facebook.