Evan Evans Tours – one of the city’s biggest (and oldest) sightseeing companies – are offering an exciting new tour aimed at tourists visiting London wanting to see two of the most iconic Royal Palaces: Buckingham Palace and Windsor Castle.

And given that Windsor is a good 20 miles outside the capital, this tour provides an excellent opportunity for visitors who would otherwise have to rely on public transport to see both of these top attractions in a day without any of the hassle. It’s hassle free as your Evan Evans Royal Palaces Tour guide will meet you outside the Royal Mews opposite the luxurious The Rubens at the Palace Hotel. They will then guide you to the Palace entrance… and through the rest of your day. 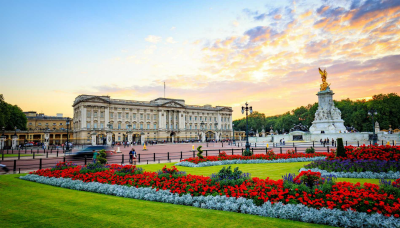 The largest working palace in the world has been officially home to the Royal Family since 1837. With well over two hours to explore the Palace, with the aid of a multimedia tour guide you will have ample time to soak in the sumptuous halls of this famous landmark. The audio guide features several pieces narrated by Prince Charles himself as he reminisces about his childhood here.

Each year there is a different exhibition on the Palace tour. This year it is a selection of art from across the Royal charities, including a traditional pavilion from Turquoise Mountain, a charity that trains Afghans in traditional art forms.

After you exit the palace, there is a café overlooking the gardens where traditional British food is served. A perfect spot for tea and scones with cream and jam before taking the coach to Windsor. If you have taken younger members of your family with you, there is the Family Pavilion that features activities for all ages, from colouring to posing for photographs ‘with’ the Royal Family.

Once on the coach, your guide will give you Vox Tour boxes in preparation for later, and points out sites along the drive.

Driving through central London is not normally something I would recommend, so having the opportunity to view Knightsbridge, Kensington, and Chelsea while the more interesting landmarks are described is a pleasant experience.

After around an hour on the coach (traffic dependent), you will arrive and be lead through Windsor’s delightful old train station and on to the Harte & Garter Hotel opposite the castle itself. Traditional fish and chips are provided as the main course, followed by an apple crumble. While I would recommend that any visitor should try to get the full chip shop experience when visiting London, this should leave you feeling as if you had a truly British day out.

Windsor Castle, Without the Wait 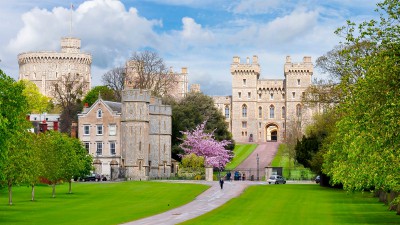 The oldest lived-in castle in the world, Windsor has been occupied continuously since 1066. More so here than at Buckingham Palace, there are large queues. But being on an officially guided tour is worth it as you are swept through in a special lane that saves you from waiting in line for up to an hour.

Once inside, you are given a tour of the main parts of the castle by your guide who will point out the key exhibitions and places of interest, as well as informing you about the history of the castle. After about half an in their company, you will have free-roam of the castle.

I would recommend visiting both St George’s Chapel and the State Rooms. The chapel is in an impressive high-mediaeval gothic style and you will recognise it, of course, from the wedding of HRH Prince Harry and Meghan Markle. The State Rooms showcase some of the best items from the Royal Collection with another excellent audio guide. Of particular note are the original versions of many royal portraits, the bullet that killed Admiral Nelson, and the rent flags the Churchill family still pay to the Queen for their ancestral home.

Depending on how long you want to spend wandering around the castle, you should have about an hour left before the coach leaves to explore the local shops to find souvenirs. If you are feeling particularly adventurous then I would recommend the walk down to Eton College to see this famous institution where many of the country’s Prime Ministers were educated.

To learn more about the Evan Evans Royal Palaces Tour in London, and to reserve your tour package, click here.

Contributing Editor Tom Wilkinson makes cocktails in his spare time and podcasts about their history at Dr Wilko’s Campaign for Better Beverages. He also produces 2 other podcasts: Hat of Many Things, on random topics drawn from a hat and Unparliamentary Language about the state of British politics.