You are at:Home»A New Era for the Iconic Ducati Luxury Motorcycling Brand

In the world of motorcycling, there is something undeniably special about a Ducati. The gorgeous, timeless lines of the superbikes and supersports, the red or yellow paint almost too deep to see, and the never-forgotten howl of a desmo’ engine under load. 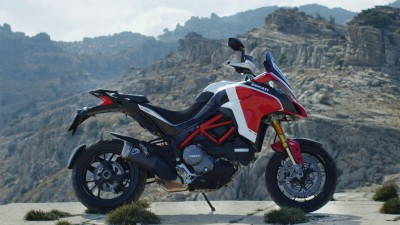 Ducati luxury motorbikes include the Multistrada 1260

The current Ducati era probably started with the original 851 back in 1988. At that time, Ducati was arguably an enthusiast’s brand. Fine handling, beautiful looking machines, but with a reputation for being electrically and mechanically fragile and expensive to own. The launch of the 851 and the subsequent, iconic 916, made Ducati a household mega-brand and began over two decades of motorcycle sport dominance.

Ducati is now among the most desirable of luxury brands and, as was recently announced at the Esposizione internazionale del ciclo, motociclo, accessori (EICMA) motorcycle show in Milan, Italy, we are on the threshold of a new and exciting technological era.

Here are some details of the latest Ducati luxury motorbikes from the show:

As the name suggests, the 1299 Panigale R Final Edition will be the last of the V-twin superbikes.  This is the last incarnation of the legendary liquid cooled V-twin 8-valve desmo engine first seen in the 851 almost 30 years ago.

Fans needn’t worry, though. The 2018 Panigale V4 S is likely to be a worthy successor as Ducati’s road and race flagship superbike. It’s the most powerful Ducati ever, powered by the new Desmosedici Stradale counter-rotating V4 desmo engine developed from the successful Desmosedici Moto GP bike of the last few years.

And it’s off to a good start, as visitors voted the Panigale V4 the most beautiful motorcycle at EICMA. Backing up its stunning good looks, here are some facts and figures:

This is a staggering level of performance, and it’s all held under control by sophisticated electronic rider aids that make the bike safe, reliable and manageable by riders of all skill levels.

I’m a long time Ducati enthusiast and I own two V-twins, but this new V4 is phenomenal and is my new favorite bike.

Turn the volume up to 11 and have a listen to the awesome V4 desmo here.

In addition to the announcement about the Panigale V4, Ducati has announced new models across its entire range for 2018. There is something for everyone:

There is a new Scrambler 1100 which adds a bigger, more powerful bike to the Scrambler range.  It is designed to appeal to those who want to trade up to a beefier bike or those moving into the Scrambler family who already love large capacity motorcycles. It’s sure to be a hit and means there are now three sizes of Scrambler.

The Supersport and Supersport S continue since their launch earlier this year. These are great, practical sports bikes, gentler than the superbikes but still fast, fine-handling and great fun.

Ducati’s go-anywhere adventure bike is the Multistrada and there is an all-new one for 2018. The Multistrada 1260 has a new 1262 cm3 Testastretta DVT engine that extends power even in low gear, and a new chassis and cutting-edge electronics to improve control and ease of driving in any condition and on any road.

There are three new Monsters: the entry level 797, the 1200, and the higher performance 1200 S.  All remain true to the original Monster concept whilst refreshing the bikes to keep them current and sophisticated. The 1200 S has an electronics pack developed from that fitted to the Panigale 1299 superbike.

The dirt bike inspired Hypermotard and Hyperstrada remain in the range offering light maneuverable motorcycling for the urban warrior.

The 2018 range is completed by the Diavel. Ducati designers started with a blank canvas to create a dream sports cruiser.  The result is a monster (in the true sense, with a small m!), a low, long, sleek and aggressive motorcycle that was born to dominate the boulevard. And with 152 bhp and 123 Nm of torque, it certainly doesn’t hang about.

To complement your motorcycle, there is a new collection of apparel and merchandise for 2018.  I’ve just been browsing through it and I love it. Whether your interest is motorcycle sport, recreational motorcycling, touring, adventure or lifestyle fashion, you’ll find something there to have you reaching for your credit card.

Visit http://www.ducatiuk.com to learn more about the new Ducati luxury motorbikes for 2018, as well as details of their accessories line.

It used to be traditional to end a motorcycle article with something like, “Ride safely and keep the oily side down.”

But, in fact, modern Ducatis don’t leak oil, so they don’t really have an oily side.  So, until next time, ride safely…

Contributor J Peter Estibeiro is a life science entrepreneur and enthusiast for all things unusual. A lover of Land Rovers and motorcycles, he’s an occasional writer and gentle adventurer.