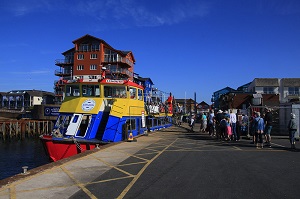 You probably have heard of the White Cliffs of Dover? But have you seen the red cliffs? The cliffs along the southwestern coast of England, part of the Jurassic Coast, are a rich red color. The Jurassic Coast is 95 miles long and has more than 185 million years of the history of life on earth. You will find some of the oldest rocks in the world.

One way to see the Jurassic Coast of England is taking a cruise offered by Stuart Line that lasts two to three hours. The seats, on the upper deck of the boat, are metal benches, but they do provide blankets to sit on, which makes the seats comfortable. The trip starts and finishes in Exmouth, which is located about 30 minutes south of Exeter.

The Jurassic Coast is a “natural” UNESCO World Heritage Site (2001), the only natural World Heritage Site in England. It is recognized for its outstanding historical significance. The cruise takes you along one of the oldest sections of the site known as the Triassic Era. 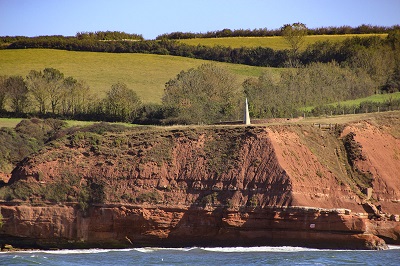 As the boat starts, you will have great views of Exmouth. The town is a quaint place where the River Exe meets the ocean. The seawall along the esplanade is over 170 years old – you would never know it, it looks modern. The wall was declared an English Heritage Listed Building in 2003. It was historically important for the development of this town.

There is a marker—a Geoneedle in honor of the area being named a heritage site. (See picture.) HRH Prince Charles was there to dedicate the marker in 2002. You will have a chance to see this Geoneedle during the cruise. If you like to hike, you may want to venture out on the South West Coast Path from Exmouth on the National Trail to see it upclose.

Remember the red cliffs? You will see long stretches of red cliffs (and before the boat turns around some white cliffs too). As the waves wash up against the soft red stone cliffs, it turns the water in the area red. This is very different from the beautiful blue water you will find on a tropical island. The red water is a sight to see. 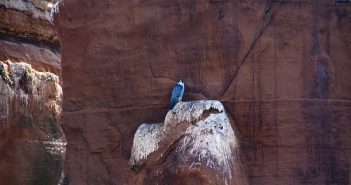 A Paragren Falcon on a ledge of the red cliffs. (Photo: Tom Graham)

Sailing along, you will come to a nesting area for a variety of birds, popular with the bird watchers on the boat. It was amazing to see not one but two Peregrine Falcons. They are gorgeous birds, and they are the fastest member of the animal kingdom.

Other interesting things you will see include a caravan park that, when full, has around 16,000 residents, the largest in England. You will sail by a British military practice firing range, which you can hear miles away. Watch out when you see a red flag.

Just before the boat gets to the town of Budleigh Salterton, one little warning, you will pass a clothing-optional beach; you can decide to take a look or not. During most of the year, Budleigh Salterton is a popular beach town, one of the oldest in England. There are dozens of colorful beach huts, and the beach is unique. It is all pebbles. You will find ancient pebbles that wash out of the cliffs and onto the beaches. It is illegal to take any pebbles from this beach. People have fun building elaborate pebble towers.

As time is limited, not included during this cruise is going to the east end of the Jurassic Coast, where you would find the iconic Durdle Door. It is located south of Dorchester, which is also a great Roman destination in the Dorset area. The door is formed from hard limestone and stands nearly vertical from the ocean. If you have the time it is a good place to explore on your own. 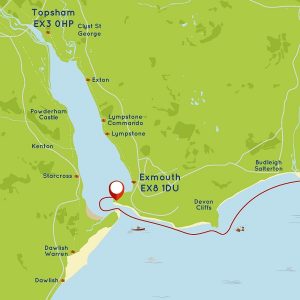 During the cruise, one option is to pre-order a traditional Devon tea and scone. A cruise and Devon tea is a great way to enjoy an English day out. They also serve a variety of other things to eat and drink, including wine. As long as the seas are cooperating, it is a beautiful way to see the Jurassic Coast.

Cost (not including drinks or food as of February 2020)

Cynthia Graham, Blue Bag Nomads, is enthusiastic about international travel and has visited a wide variety of destinations. As editorial director, creator, and freelance writer, she enjoys sharing her travel destinations, tips and photos with the hope to inspire you to get out and travel more! She is also an international house sitter and has house sat non-stop for four years in 10 countries.