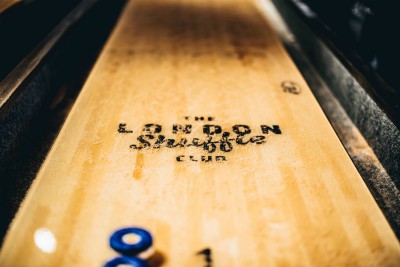 After two successful major consecutive pop ups in London, the London Shuffle Club has now opened a permanent shuffleboard spot in Shoreditch. This popular and highly addictive game has taken the US and Canada by storm, and even Henry VIII himself was a fan of the game.

Fast forward to the 21st century, however, and now the London Shuffle Club has put its own spin on things by creating a miniature version of the game. It’s a fairly simple activity to explain. Players battle it out by pushing plastic and metal weighted pucks down a long, smooth, wooden table trying to out score each other. More or less, it’s curling, but on a much smaller scale… and without the ice and cold.

It may look easy, but let me be the first to tell you it’s all about technique. And not only that, it’s not about trying to outscore each other, it’s also about trying to knock the opponent’s puck out of a point scoring position. After a few practice sessions, there was no stopping anyone including, myself and my partner in crime. It’s very competitive indeed, and a lot of fun.

Cocktails at the London Shuffle Club 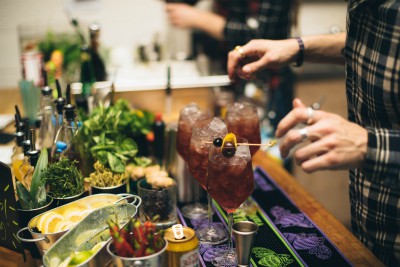 This small, secluded venue is the perfect place to wind down, let loose and have some fun. The cocktails are boozy and refreshing – the Plumdog Millionaire being a particular favourite of mine (whiskey, plum wine, tamarind and mint) – and the pizzas, delivered from Voodoo Rays, were demolished quicker than a bullet train.

Londoners and visitors alike should really check out this unique pastime. Forget darts or pool at the local pub, the shuffleboard club is the way forward. Electric atmosphere including some old school classic disco tunes via Earth Wind and Fire, tantalising cocktails and delicious food… there is no better way to spend your evening with friends as you have a go at this increasingly popular game.

Winter is going to be an exciting period for this lot, too, with other fun packed events happening across town, including a spot at the Truman Brewery in Brick Lane.

The Little Shuffle Club will be open to the public five days a week (Tues-Sat) with afternoon and evening group bookings a big draw. Those looking to take the space for numbers over 20 should contact bookings@londonshuffle.com.

Contributor Joe Teng, aka ‘FoodPunk Joe’, is a London-based food critic on a one-man mission to showcase the city’s best cuisine, from fine dining restaurants to food markets. You can follow his adventures at http://www.foodpunkjoe.wordpress.com/