We don our tweeds and head west into the half sun, half mist of the Brecon Beacons for three days of luxury down time at Llangoed Hall in the Wye Valley of bucolic Wales. 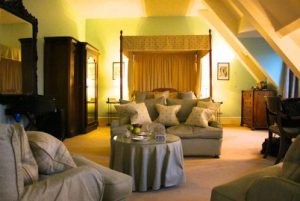 Under the leadership of Managing Director Calum Milne, who officially took charge of the hotel in 2012, the hotel has, quite deservedly, gone on to win numerous accolades, including:

Arriving at the award winning Llangoed Hall after an easy day of touring and driving, we are anxious to be indulged in a little Welsh luxury and hospitality and are welcomed by the affable and entirely charming Brian Irving, who will be our go-to for all things Llangoed Hall over the next three days. We are shown our room and are welcomed by a beautiful bowl of fruit, delectable sweets which we pair with glasses of warming sherry, and personalized notes proclaiming ‘Croeso cartref’: Welcome home. A lovely start to a wonderful three-day mid-week break.

We sip from crystal glasses of pre-dinner Llangoed Hall Special Whiskey and savour Chef Nick Brodie’s exquisite canapés, amongst the most unusual and delicious this author has eaten, before removing ourselves to the neighboring Whistler Room for a private viewing of the works of the renowned UK-based artist James Abbott McNeill Whistler, Augustus John, Walter Sickert and other Edwardians, on display and delighting Llangoed Hall guests. 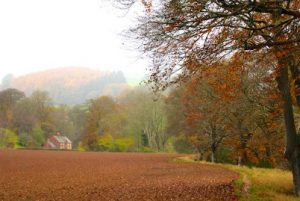 Llangoed’s park-like setting is a treat to explore

Our dinner is an extended and extravagant 13-course vegetarian dégustation: a beautifully presented ribbed bowl of torched leek, duck egg mimosa, and Jerusalem artichoke begins our tasting, and finish with smoked ice cream, cocoa nib and caramel sauce, all accompanied by individual wine pairings. Incredible. Many of the ingredients in Chef Brodie’s imaginative yet sensible food come from his burgeoning kitchen garden, harvesting his foraged ingredients when they bloom and adapting his beautifully presented seasonal dishes accordingly.

We linger and chat over a nightcap by the roaring fire before wandering up to our turned-down room. Breakfast the next morning is indulgent. And if you’re feeling particularly naughty then treat yourself even further with duck eggs and laverbread for a traditional Welsh twist. Having eaten so splendidly the night before, we opt for simple soldiers and eggs.

Llangoed Hall overlooks lovely green and misty meadows leading down to the River Wye, with the beautiful Black Mountains visible in the distance. We donned some essential hotel-provided wellies and set out on a typical mud–crusted Welsh tromp before the driving rain drove us back to the warmth of the house, a welcoming fire, and a lovely afternoon tea service. The hotel also has beautiful rose and wildflower gardens, and a maze to easily navigate.

Chef Brodie is particularly proud of his kitchen garden and humbly boasts: “The Hotel sits on 17 acres of land so sustaining our daily output is certainly achievable. I love going into the greenhouses or foraging the vegetable beds for daily inspiration. It makes menu planning easy and keeps you bang on season with our dishes. Our smokehouse adds an extra dimension to what we do. We even use our chickens, ducks, and quails for the eggs we serve.”